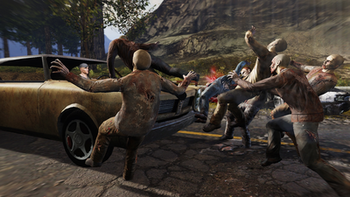 I'm afraid I'll have to fine you for that, sir.
Advertisement:

One of the dumbest things a zombie can do when humans are around is jaywalk, since doing so will turn the undead into roadkill, particularly if their head sustains severe damage.

Of course, it's not their fault they end up being easy targets for cars, both on and off the road. After all, they're dead; many of them don't understand the concept of traffic regulations, to say nothing about them probably being visually impaired. If they were half as smart as the zombies from Return of the Living Dead, though, they'd probably look both ways before crossing the road, let alone shambling out in the open at all. If even then they go walking on the roads, well, they probably deserve a special Darwin Award if they get hit.

Subtrope of Car Fu. For other ways to kill zombies, see Burn the Undead, Shock and Awe, and the traditional method of Removing the Head or Destroying the Brain.