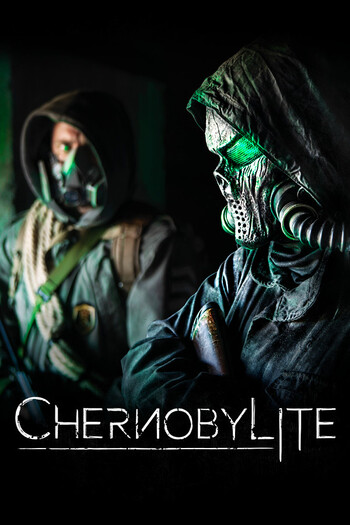 Igor Khymynuk on the left, the Black Stalker on the right.
Advertisement:

Chernobylite is a Survival Sandbox with RPG Elements, developed by the Polish developer The Farm 51, who had earlier created Get Even. The game was based off of their earlier experience creating a VR model of Pripyat; it was funded

The protagonist is a scientist named Igor Khymynuk, whose fiancé Tatyana went missing at the time of the Chernobyl disaster, who comes back the Exclusion Zone to search for her thirty years later. Or rather, he is interested in seizing Chernobylite, the mineral formed as the result of nuclear meltdown which was found to have a range of properties defying conventional physics up to and including the potential to control the flow of time, and using that to reunite with Tatyana no matter what. However, Igor isn't the first person to have thought of that, the Exclusion Zone once again hosts a sizeable presence of Russian forces from the specially formed NAR division.

Gameplay is a mixture of Survival Sandbox, Stealth-Based Game, and Renovating the Player Headquarters. At the start of each day you pick an area of Pripyat for Igor to search for clues about Tatyana, along the way you collect resources, and at night you build up your base to give you access to more advanced equipment.

On April 26, 2022, Chernobylite received a free Nex-Gen upgrade which significantly improved the game's visuals, and an Updated Re-release in the form of the Enhanced Edition.

While S.T.A.L.K.E.R. is the obvious reference point, this game has no direct relation to it. It is also unrelated to, CHERNOBYL: The Untold Story another 2019 game whose storyline directly involves the Chernobyl disaster.