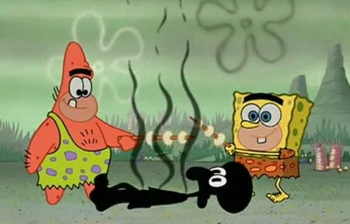 When something suddenly catches fire, the typical responses are either fleeing or attempting to put it out. However, some people will opt to instead roast food over the fire.

Typically it is a stick with either marshmallows or sausages as if it were for a normal campfire.

Compare with Instant Roast, The Snack Is More Interesting, and Couldn't Find a Lighter. May overlap with Dissonant Serenity since it usually involves being unusually nonchalant, Ignorant About Fire, and Inappropriate Hunger. See also Autopsy Snack Time for another inappropriate time for food.