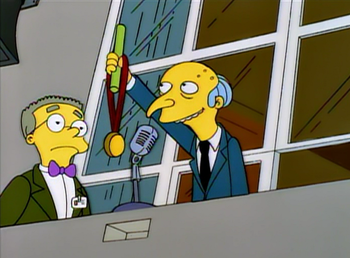 "So, a round of applause for: this inanimate carbon rod!"
I can't believe it. My purebred, which cost me $1,700... lost to a rock.
— Squidward Tentacles, "The Great Snail Race", SpongeBob SquarePants
Advertisement:

This trope is what happens when a competition has one or more competitors who are inanimate. This trope also applies in cases where the competitor is a corpse, but not out of the running. Usually found in comedic works, to give otherwise tense competitions an air of absurdity. Bonus points if the inanimate competitor actually manages to win the contest against the far superior competitors even without doing anything at all. Usually a case of Nothing Is Funnier, particularly if we are shown the result but not how it happened.

Compare Animal Athlete Loophole, where the competitor is animate, but not human. If the competitor used to be animate but has since died, this may overlap with Mummies at the Dinner Table. Related to Enmity with an Object.

A cowboy duels a toaster.

A cowboy duels a toaster.