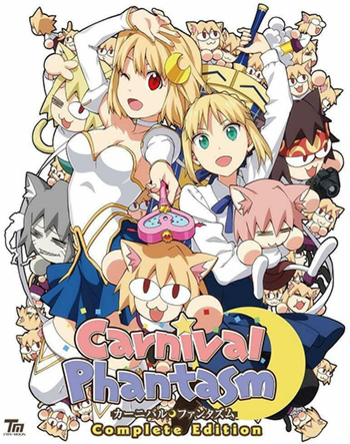 And now for something completely different.
Advertisement:

The Nasuverse is a setting filled with an immense amount of backstory, an extremely complicated set of rules for its Functional Magic, and protagonists who sometimes have to ask hard questions about themselves and the people around them. In any given work, death, deceit, and betrayal abounds.

But let's ignore all of that and focus on the characters involved having fun!

Based on the official Type-Moon gag manga Take Moon by Eri Takenashi, Carnival Phantasm takes the casts of Tsukihime and Fate/stay night and places them in a series of wacky situations, such as the Fifth Grail War being reduced to a game show or grand prix.

There are 3 'Seasons', with the first released mid-August 2011, the second released at the end of October 2011, and the third getting its day at the very end of 2011. Included on the final disc release was the OVA Fate/Prototype, a short animation showing off concepts and designs meant for the original incarnation of Fate/stay night.

During the Type-Moon Fes. 10th Anniversary Event of 2013, they displayed a new Carnival Phantasm episode.

As this is essentially a spinoff of both Tsukihime and Fate/stay night, many of the tropes used on their respective pages would also apply here. Please limit the tropes used to examples specifically pertaining to Carnival Phantasm.

On December 31st 2020, Type-Moon announced a sequel known as Fate/Grand Carnival, which features the cast of Fate/Grand Order.

Do what we normally do

Rin promises the crowd that she will win the Holy Grail competition fairly, and then tells Archer that she is willing to cheat to win.

Do what we normally do

Rin promises the crowd that she will win the Holy Grail competition fairly, and then tells Archer that she is willing to cheat to win.