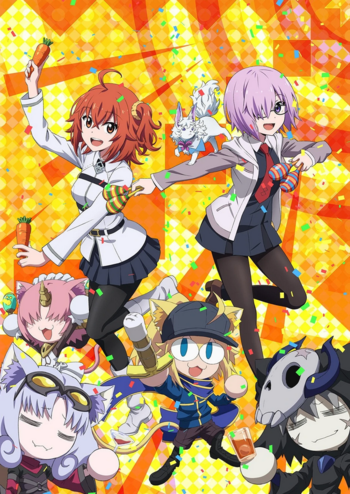 Fate/Grand Order is a story with incredibly dense World Building that encompasses ideas from the entire rest of the decades long Nasuverse franchise. It tells tales of epic heroes, mythic tragedies, and gods and monsters battling it out with all of human history in the balance. Any given arc can be filled with desperation, sacrifice and death.

...But let's once again ignore all of that and focus on the characters involved having fun instead!note Don't worry, this time we're not going to go as extreme as the other kind of fun... Maybe.

Fate/Grand Carnival is the 2021 spin-off of Fate/Grand Order, similar to 2011's Original Video Animation comedy short series Carnival Phantasm, featuring the Loads and Loads of Characters that now make up the roster of Type-Moon's massively successful Fate/Grand Order mobile phone game rather than just those from Tsukihime and Fate/stay night specifically. Which unsurprisingly leads to even more ridiculous situations.

A special episode aired as part of the Fate Project New Year's Eve TV Special on December 31, 2020. At the end of the short, two full OVA seasons were announced which would be released on June 2, 2021 and August 25, 2021.