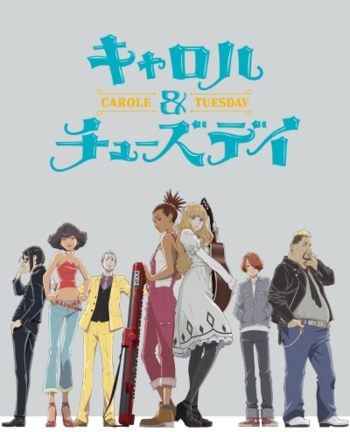 Carole & Tuesday is a Japanese anime series produced by Studio BONES. It was created and directed by Shinichiro Watanabe of Cowboy Bebop fame. The show began airing for 24 episodes on Fuji TV's +Ultra programming block and Netflix Japan on April 10th, 2019. The first 12 episodes were released on Netflix worldwide on August 30, 2019, while the second half was released the following December.

Set 50 years after humans have colonized the planet Mars, our story starts with the very sheltered and innocent Tuesday running away from home and heading to the largest city on the planet, Alba City. Once there she quickly learns that its not an easy place for a girl with no plans.

Carole is a young woman barely making her way in the city, and has just lost her job, again. With nothing left to do she begins playing her keyboard and singing on a bridge, where a disheartened Tuesday happens to also be and the two girls instantly connect over Carole's song.

Tropes present in the work are:

The Mermaid Sisters' song for Mars' Brightest is nothing but profanity sung in an upbeat tune. Unsurprisingly, they are quickly disqualified from the competition.

The Mermaid Sisters' song for Mars' Brightest is nothing but profanity sung in an upbeat tune. Unsurprisingly, they are quickly disqualified from the competition.