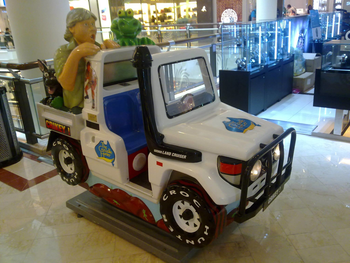 on the ride says: In memory of "The Crocodile Hunter" - Steve Irwin - a great Australian, Conservationist and Wildlife Warrior. note Crocodile Hunter by Kiddie Rides Australia, photographed by RAMChYLD.
Advertisement:

Ah, kiddie rides. Those things that practically suck the spare change out of your pockets (particularly if you're a parent) and are largely found in or near shopping malls. The things that attract little kids (and Periphery Demographic crowds like rowdy teenagers and YouTube video makers interested in old kids' shows) like magnets.

Originally invented as a Christmas present by an engineer for his kids, and then commercialized as a portable alternative of the carousel (and additional income earner for grocers), these have since crossed into Merchandise-Driven (and occasionally, Misaimed Marketing) subtrope territory with the introduction of the licensed kiddie ride. Now kids will be able to rent up to one and a half minutes of their favorite characters' time for a dollar or two.

Subset of The Merch.

If a TV show targeted at children gets very popular, it's bound to spawn at least one kiddie ride. If it has a catchy theme tune, the ride will play a snippet of it every five minutes to attract attention, and on repeat while in operation.

Note: This index is a list of shows and franchises that have been immortalized by having their characters licensed for being made into a kiddie ride. It does not involve works that feature a kiddie ride in their plots; those belong under another trope (that hasn't been made yet).