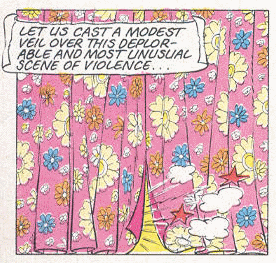 "What followed was... ugh. Horrible. It shall not be described here.[...] Have you ever been to a slaughterhouse, like for a school field trip or something? It was a bit like that. Only to a person.
"Honestly, just don't think about it, go look at a picture of a bunny or a kitten or something. You'll be happier."
— Uninvited Guests

A gag in which the camera cuts away or is interrupted by a bumper explaining the following scene is too disturbing to see, or, more importantly, would not be allowed by the broadcasting network.

Trope name comes from an episode of Freakazoid! where a cartoon supposedly filmed in "Relax-O-Vision" cut away from scenes that were purportedly too much for the kids to watch to relaxing images like ocean waves or a fish-tank, usually accompanied by the Theme from "A Summer Place"

note  This piece is more commonly known as the ubiquitous "peaceful music". Bonus points if sounds from the disturbing event still can be heard over the image, usually with lots of Noodle Implements thrown in.

When the infamous Link to the Past romhack Parallel Worlds hits Diabetus with a game-breaking bug, he doesn't take it well.

When the infamous Link to the Past romhack Parallel Worlds hits Diabetus with a game-breaking bug, he doesn't take it well.