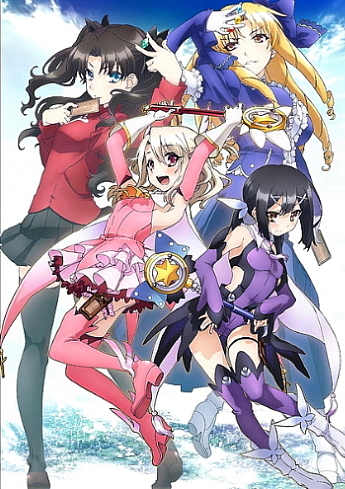 No, you're not hallucinating. It's real (and awesome).
"Hello there! I'm a magical stick of love and justice, Magical Ruby-chan! Do you want to be a magical girl? What do you think? Become a magical girl, join forces, and fight all that I deem evil!"
— Kaleido Ruby
Advertisement:

A Spin-Off manga of a well-known Eroge, which features the Token Mini-Moe of said game as a Magical Girl... Wait, where have we heard this before...?

Ordinary Elementary School Student Illyasviel von Einzbern lives together with her older brother Shirou and their two guardians, Sella and Leysritt. She is a good sprinter and enjoys watching Magical Girl anime. One day while taking a bath, she ponders about being a Magical Girl herself, flying around with magic, seducing her brother, when suddenly...

Her brother comes into the bathroom... and is knocked out by a talking Magic Wand, "Magical Ruby-chan". Through a combination of sweet-talking, lies, and brute force, it tricks Illya into signing a contract with it to be a Magical Girl. To make things worse, Ruby's former master, a mage named Rin Tohsaka, then forces Illya to become her servant and help collect seven "Class Cards": mysterious relics with the power to summon the spirits of legendary heroes, which are currently running wild in Illya's hometown.

Complicating matters yet further is the New Transfer Student Miyu Edelfelt, who wields Ruby's sister magic wand Sapphire and has been taken under the wing of Luviagelita Edelfelt, Rin's rival in magecraft. As Illya tries to befriend the introverted Miyu, she finds herself thrust into a truly strange competition between magus students — only for everyone to discover that the Class Cards are much more dire a threat than anyone expected. The four girls must set aside their differences and work together to subdue the Class Cards and uncover their mysteries, as well as some mysteries surrounding Illya and Miyu themselves...

It's largely an Affectionate Parody, both of Fate/stay night and Magical Girl works, and doesn't take itself too seriously at first. Then, it does.

In addition, a crossover event with Fate/Grand Order took place in 2016 (2018 for the EN version) and again in early 2019 (2021 for the EN version), featuring Illya, Chloe, and later Miyu as playable Servant characters. Another Crossover event happened in 2021 with the Symphogear XDU gatcha game. It has also had two crossovers with Crash Fever gatcha game, first in 2021 and again in 2022.