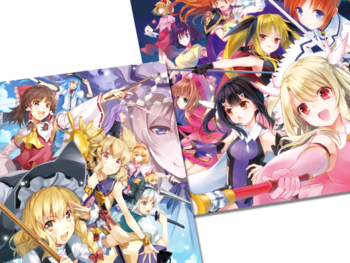 Unlike the previous game, NEXT focuses on a two-on-two Tag Team system in two modes:

Another difference between this and the previous game is the fact that it was released in two versions: Fantasy World Side, which features Touhou Project characters in their Touhou Sky Arena incarnations and Magical Girl Side, which has characters from various Magical Girl works. Both versions can be combined together to make a more complete game.

Like its predecessor, this game features a Story Mode, a Versus Mode, Survival, Training and online play via the Network mode. These are the following characters, grouped by what side they appear in, and their origin:

. In addition, a complete version of the game was released on August, 2017 at Comic Market 92. Go here

for updates and patches for the games.