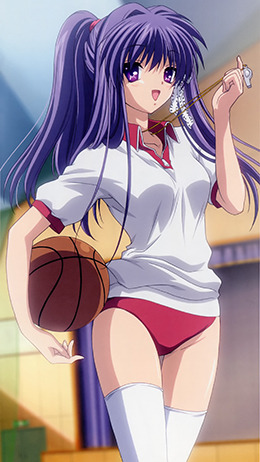 Part of the trinity of Japanese school fashion including the Sailor Fuku and the School Swimsuit is the school sport uniform (otherwise just called gym clothes, and commonly referred to as just bloomers or buruma for their high-legged shorts), a staple in many Anime, Manga and Video Games. The design consists of two pieces; a short-sleeved white shirt and (depending on if the wearer is female or male) legless briefs or shorts, respectively. The latter are typically dark blue or red, and the colour also usually appears as stripes at the ends of the sleeves on the shirt and/or around the neck. Sometimes a nametag of the wearer is added to the chest as well.

Like the other two, wearing a school sport uniform can be done for the obvious purpose of doing sports (at school or otherwise) or sometimes a modest form of Fanservice. It also invokes a feeling of nostalgia much like the other two about the times during high school. Plus it's Moe if worn by a cute girl. It can also show a character to be competitive, like during a school sport festival, especially if the character also dons a Martial Arts Headband.

It should be noted that in Real Life, bloomers are considered very old-fashioned — they were phased out starting in the mid-'90s because of modesty concerns for female students, with the standard gym shorts becoming unisex. However, the image persists in modern-day Japanese media, because the artists are adults drawing on their own memories of high school (and its pop culture depictions).

School Sport Uniforms, much like School Swimsuits, are also often a form of clothing reward in Video Games, like Role Playing Games or Beat Em Ups.

Also see Joshikousei, who usually wear them and She's Got Legs which in this trope's case are usually quite athletic.