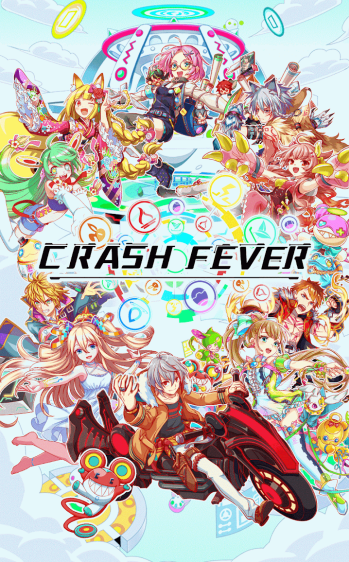 It all began with a single error...note Clockwise, from bottom: Belial, Jerry, Mobius, Lancelot, a Little Humpty, Happy 100, Tamamo, Murasaki Shikibu, Enkidu, Cauchy, an Aqua Frog, Prometheus, and Pareto. A handful out of thousands of units.
Crash Fever is a free to play puzzle mobile game with RPG Elements and Visual Novel-like cutscenes from the Japanese publisher Wonder Planet. Far into the future, almost everything is online and connected to the virtual land of ALICE. However, cybercrime was rampant to a point that the government couldn't get a hold on it, so a band of avatars known as the Superior Seven, some of whom would go on to form ACADEMIA, created a super-AI to manage everything named the QUEEN of Hearts. But then, certain groups of hackers and crackers started increasing their attacks on each other and the QUEEN. The constant conflict led the QUEEN to believe that all mankind is evil, and that the only way to preserve peace in ALICE was to eliminate humanity, first resorting to trying to straight-up delete ALICE, but that failed as there were already failsafes in place for that. She then waged war on ALICE, leading to violence and many real-life services and the A.I.s managing them becoming buggy or defunct. This is where you come in, the
Advertisement:
Adapter, a special avatar granted the ability to make clones of units (many of whom are based on real life or literary figures) to fight on your side and use the special currency Polygons, using them to fight the QUEEN'S makeshift army and other foes. And that's only the basic premise.

Gameplay is similar to Puzzle & Dragons but with an overall faster feel to it. You tap panels (which chain with neighboring panels of the same element) up to three times in one turn to attack, with the attack's damage this turn being determined by how many panels were destroyed. Chain 6 panels in one turn and one of the attacking unit's Crash Panels is generated, which, when tapped, adds a Crash Skill to this turn's attack. Chain twelve or more and you get a Super Crash Panel, which has a bomb panel inside that blows up an area around it. After enough turns have passed, you can use Skills, which have wildly varying effects from unit to unit. After breaking enough panels, you can use Fever, which heals and attacks depending on how many panels you tapped in its duration, but its main use is to clear the board of nasty hazards.