"Step up your BOOM!"
—Jaxon 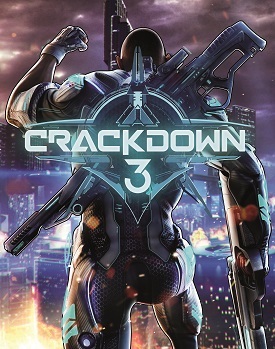 Crackdown 3 is a Wide-Open Sandbox game developed by Sumo Digital and published by Xbox Game Studios for Xbox One and PC.

The game takes place ten years after Crackdown 2, with an Agency team led by Jaxon (Terry Crews) being sent to investigate strange terrorist activity inside a city controlled by criminals, upon entering the city's airspace via Cool Airship, a strange green pulse is activated and turns the entire team into ashes while killing the world's electric grid. Years later, one of the agents is revived by a rebel movement fighting against the abusive TerraNova government of New Providence, who are suspected to have caused the blackout years prior.

A major selling point for the game is the multiplayer, which features cloud-powered destruction that's said to run with the power of twelve Xbox Ones at once. The core gameplay is maintained, with the premise being based on going around the city to collect orbs while making yourself stronger in the process.