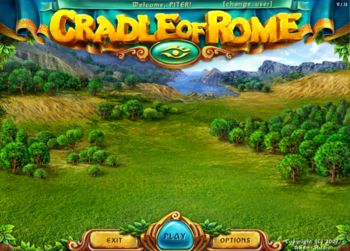 Here, you will build Rome. (Replace with a sandy area for Persia and Egypt.)
Advertisement:

The Cradle Series (also considered as part of a Jewel Master series on handhelds) is a hybrid of Match-Three Game and city building. The games were released throughout the 2000s and 2010s for PC, Nintendo DS, Nintendo 3DS, and the Wii at one point.