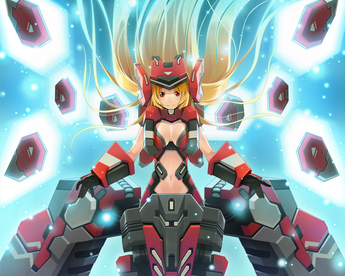 Seraph Promotion Gives you wings. Made of Hard Light. Which are stationary.
"A force consisting purely of Crimroses would be like a Zerg Rush, only the Zerglings have breasts and are adorable."
— One of Cosmic Break USA players
Advertisement:

is an MMO third-person mecha shooter created by the Japanese company Cyberstep, available in Japanese, English, Chinese and Korean. It is the sequel to an earlier game, C21. The Japanese servers have been running since 2008, and the English version came out of its betas and had its official release in December of 2010. The English version shut down on March 5, 2019, marking an end to just over 9 years of service, with the original Japanese version following suit on August 20, 2020. Both versions were replaced by an updated international version named Cosmic Break Universal, launched on January 20th, 2021 on Steam.

Also, there are several humanoid bots with a backstory, namely Crimrose, Ivis (10min video and short manga), Ouka (a Mission), Lily Rain EVE (a one-shot manga, a promotional video, and a Mission), Elisalotte, and Melfi (a two-player mission)

The following tropes can be observed in Cosmic Break: