Feed It a Bomb 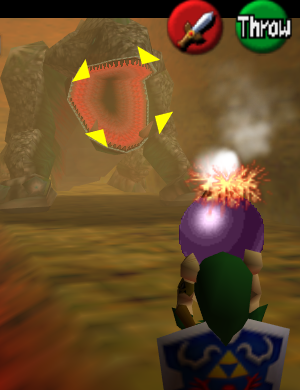 Open wide!
"Don't fight him, feed him! Somethin' spicy. Know what I mean?"
— Droolik, Link: The Faces of Evil
Advertisement:

When a character is facing an enemy with a large mouth and a penchant for eating said character, and tries throwing a bomb into its mouth. The enemy eats it, you hear a "boom", and then the enemy will either die* and if your rating allows it, turn into bloody kebab filling, or get SERIOUS indigestion. It never occurs to them to just keep their mouth shut and tail sweep/eye beam/claw the character.

A Sub-Trope of both Stuff Blowing Up and Attack the Mouth.

Compare Eat the Bomb (when the bomb doesn't kill the Big Eater), Too Spicy for Yog-Sothoth, Assimilation Backfire, Kill It Through Its Stomach, Insert Grenade Here (blowing up vehicles in a similar fashion).

Contrast Mooks Ate My Equipment (where it likes eating your stuff).

Alternative Title(s): Throw A Bomb In Its Mouth, Feed It With Bombs, Dodongo Dislikes Smoke