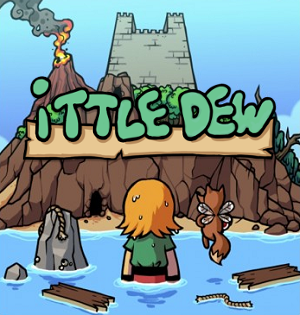 Ittle Dew is an Action-Adventure game developed by Swedish developer Ludosity, and the first game in the Ittle Dew series.

The title character is an adventurer who gets marooned on an island with a large monster-infested castle. She's quick to take on the adventure, but even more interested in finding a way off the island if the castle doesn't prove challenging enough for her. Along with her fairy/fox companion Tippsie, they seek the guidance of eccentric shopkeeper Itan Carver, who is willing to build a raft to help them escape in exchange for a mysterious artifact within the castle.

The game is heavily influenced by The Legend of Zelda series, with Ittle using her weapons to solve puzzles and search for hard-to-reach treasure. It's much shorter and simpler than a typical Zelda adventure, with three different tools and a ton of shortcuts to encourage speed runners and sequence breakers. One of the draws is that you only require 2 of the 3 items to finish the game so you're encouraged to find different ways to get to the end goal using different load-outs. The island is also sprinkled with smaller dungeons to test the player's puzzling prowess, as well as a "Master Cave" for even harder puzzles.

Ittle Dew herself, Jenny Fox, Masked Ruby and Ultra Fishbunjin 3000 all return in Slap City as playable characters (and barriers make a cameo).