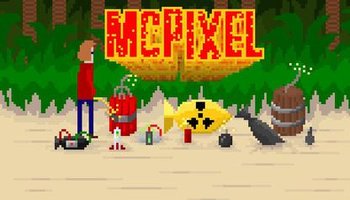 There's a bomb somewhere in the building/house/deserted island/whale/castle/school/outer space/(insert location here)! You've got twenty seconds to defuse it! What would you do?

Be a complete idiot, apparently.

In this cross between WarioWare and Leisure Suit Larry, follow the adventures of adventure man, jack-of-all-trades and general vandal McPixel as he finds himself in various cliffhanger situations, and has only 20 seconds to save the day with a mixture of cartoon logic and wanton destruction.