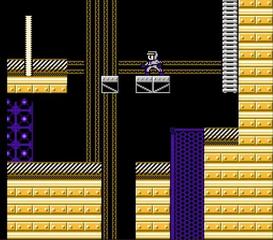 Mechanic Man is a downloadable PC platformer based on Mega Man (Classic). You play as a mechanic and fight six robot masters created by Dr. Bronze.

A world where science and technology developed a little bit than now, a man named Steel was operating a machine repair shop in a certain forest. He was familiar to people as a great mechanic man.

The metal invented by Steel, Konjac Mythril, can be processed to any shape and firmness, it was a material indispensable for repair.

However, one day, the Mythril and the manufacturing machine in the repair center were stolen by someone.

It appeared before the confused Steel that it was the authority of robotics engineering, Dr. Bronze.

"Robots cannot be built without collecting various technologies from all over the world, and your skills will be sacrificed for my research to succeed!"

And soon it will be made in the name of Bronze. Robots started spreading to various places in a blink of an eye.

Steel stands up now to dismantle the robots in each place and regain the robbed technology.

Get the game here.