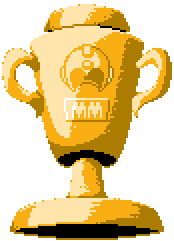 "They started out as Mario contests, in both SMW and SMBX. One day I was drunk enough to be all like 'hahaha let's do that but with mega man!!' and the rest is history."
— SnoruntPyro, on the contest's origin
Advertisement:

Make a Good Mega Man Level Contest (or MaGMML Contest) is a fan-made Mega Man (Classic) competition and game organized by SnoruntPyro that over 20 people participated in.

The goal of this contest was for level designers to create a good Mega Man level using Game Maker 8.0 and a super-modified version of Blyka's Engine, a Mega Man game engine also created using Game Maker.

All of the entered levels would be scored on six categories (personal fun factor, other person fun factor, uniqueness, creativity, graphics, and music), organized into tiers, and then included into a compilation game. Both the competition and compilation game were originally released in early 2016. Overall, 20 main stages and a few postgame levels were included in the final game, with the contest results livestreamed

by Flashman85. A Remastered version, made using the Mega Engine, was released in May 2019, on the two year anniversary of the original MaGMML game.

A sequel, Make a Good Mega Man Level Contest 2, was produced, which this time allowed the wider public to participate with level submissions and also featured an early version of the Megamix Engine

, a new and more polished engine (even in its state at the time) that's also coded in Game Maker, with public testing done on the devkit before the contest officially began. Submissions closed at the end of February 2017, with a total of 81 level submissions being received, and the contest results were once again livestreamed by Flashman85 the following May, which are archived here

A third contest, Make a Good Mega Man Level 3, was announced some time after 2's release, and will be made using a more robust and polished Megamix Engine which, among other features, includes almost every enemy, miniboss, and gimmick across the series (including the Game Boy games and Rockman & Forte: Mirai Kara no Chousensha), and almost thrice the number of prebuilt bosses. The devkit was released on September 15th, 2018, and the submission period ran from September 22nd to November 25th, with a penalized grace period afterwards for late submissions which ended on December 2nd. After a number of delays, judging has finished, with the results livestreamed August 14, 2022

. The game is currently being prepared for release.

Another collaboration called "Episode Zero" was officially announced on May 23rd 2018. Originally envisioned as part of the remastered version of the first game, this interquel follows Zero as he investigates the mysterious group SRARA (Simulation Recon and Regulation Administration) and their attempts to sabotage the second festival under the pretense of safety inspection. It was released on June 26, 2020.

You can watch the trailer for the third contest here!

The contests and games can be found here

. Now has its own Wiki here.

The overall series provides examples of: