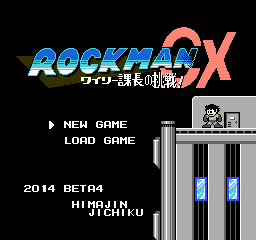 Rockman CX is a ROM hack of Rockman 2 by Zenkaku Himajin, completed on August 23rd, 2016. Compared to other Rockman 2 hacks such as Rockman No Constancy, CX is a much larger project, reskinning the entire game into something that closely resembles the Mega Man X series, complete with an intro stage, a MMX-styled dash ability, and an entirely different plot, starring Evil Counterpart Rockman CX as the game's Villain Protagonist battling Dr. Light's army of robots. Like many of the ROM hacks that preceded it, it's not without it's share of Nintendo Hard Platform Hell moments.

An English translation by Himajin was released in March 2017.