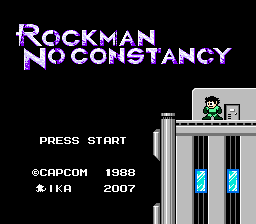 Rockman No Constancy is a ROM hack of Rockman 2 by Japanese ROM hacker IKA. Its features are awesome graphics, great music, and insane difficulty, making it one of the most well-known ROM hacks out there.

Comes in Normal (normal difficulty for Mega Man) and Hard (no Mercy Invincibility; have fun) versions.