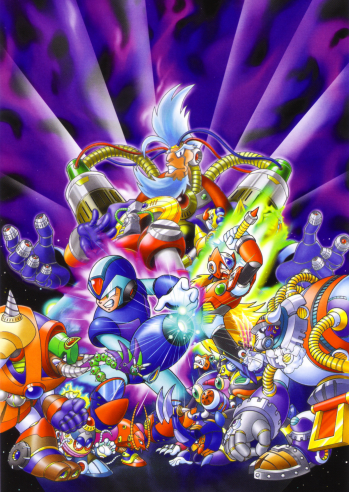 "The Mavericks who were supposed to have been neutralized by the Neuro Computer suddenly appeared and began to riot... At Maverick Hunter Headquarters, all intelligence indicated that Dr. Doppler was the mastermind behind the invasion."
— Mega Man X3 opening narration.
Advertisement:

Mega Man X3 is the third entry in the Mega Man X series, released on the Super Nintendo Entertainment System on December 1995 in Japan, January 1996 in North America, and July 1996 in Europe. It was later ported to the PlayStation, Sega Saturn, and PC with animated cut-scenes and Redbook Audio soundtrack added in. The SNES version is included with the first Mega Man X Legacy Collection for the PlayStation 4, Xbox One, Nintendo Switch, and PC.

In the year 21XX, Sigma's rebellion has been fully wiped out by the efforts of X and the Maverick Hunters, and Zero has rejoined the force after his reconstruction during the events of the second game. Additionally, the dreaded Maverick Virus has been neutralized thanks to the efforts of a Reploid scientist named Dr. Doppler. He has created a vaccine that seems to eliminate the Maverick Virus and restore Mavericks to their senses. Thankful for the Maverick cure, many advanced Reploids and former Mavericks choose to join Dr. Doppler in founding Dopple Town, a utopia for Reploids to live in peace without the fear of losing control.

After just a few months, the Mavericks who had supposedly been neutralized begin to riot. The world realizes that it is Dr. Doppler who is masterminding this new revolt, having been infected by the Maverick Virus himself. With no other choice, X and Zero must both band together to stop Dr. Doppler and his new Maverick revolution. However, X and Zero will soon realize that there may be more to Dr. Doppler's plot than meets the eye...

The Mavericks of Mega Man X3 are: