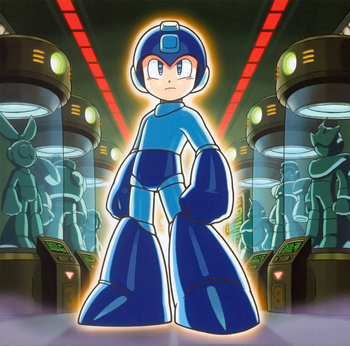 The Original Blue Bomber.
MegaMan has ended the evil domination of Dr. Wily and restored the world to peace. however, the never ending battle continues until all destructive forces are defeated. Fight, MegaMan! For everlasting peace!
— Ending of Mega Man
Advertisement:

This page covers the original Mega Man (Rockman/ロックマン) series, generally referred to as the "Classic Series." When people think "Mega Man", they usually think of this version, which makes "Classic" Mega Man one of the two big faces of Capcom (alongside Ryu).

In the year 20XX, Dr. Thomas Light — a scientist well known for his innovative contributions to the world of robotics — creates a new breed of humanoid robots called Robot Masters. These Robot Masters are revolutionary for their ability to make advanced independent decisions according to their programming, and as such, they are put to work directing other non-independent robots. Fed up with living under his colleague's shadow, Dr. Albert Wily reprogrammed six (or eight, if the remake is to be believed) of these Robot Masters and turned them into weapons of mass destruction to help him conquer the world. While gathering these Robot Masters, Wily ignored two housecleaning robots: the boyish Rock and his sister Roll. Feeling a strong sense of justice, Rock asked Dr. Light to convert him into a battle robot — and the conversion gave the world a hero: Mega Man.

After the successful conversion, Mega Man traveled around the world to stop the rogue Robot Masters. Rock's ability to analyze how things work and duplicate them gave him the ability to acquire the weapons of the fallen Robot Masters. After defeating the six rogue robots, Mega Man stormed Wily's robot factory and defeated him. Wily's persistence would lead him to attempt the same plan — and defeat Mega Man — twenty-one different times, none of which were successful.

While in its planning stages, a small team within Capcom, including the franchise's producer, Keiji Inafune, took their love for several Japanese television and manga heroes (most notably Astro Boy) and created a game where the player could feel like one of their heroes.

The first game introduced attacks and strategies to platform gaming revolving around the concept of rock-paper-scissors: each weapon a player acquires might work well on one particular Robot Master, but horribly (or not at all) against another. Mega Man also introduced the concept of allowing players to choose what stage they wanted to tackle and in what order (before having to go through a linear gauntlet of Wily stages) — a first for platform games. In spite of these two major innovations, the title failed to make an impact.

While the first game sold well enough, Capcom didn't want to give the Blue Bomber another chance, and it soon assigned the game's development team to other games. Not wanting to give up on the character, the development team begged the higher-ups for permission to make a sequel that would improve upon both the faults and the strengths of the first game. Capcom allowed the team to make a second game so long as they finished the titles they were already assigned to. When Capcom released Mega Man 2, it became a monster hit, both critically and financially. The more ambitious stage design, improved graphics, and even catchier music blew away gamers; for these (and other) reasons, numerous Mega Man fans think of 2 as the best game in the series — a sentiment Keiji Inafune himself agrees with. Thanks to the sequel's incredible sales and warm critical reception, Capcom realized Mega Man could become a Cash Cow Franchise, and happily greenlit sequel after sequel, leading to one of the most popular series of The 8-bit Era of Console Video Games.

Capcom has, to date, published twelve main games in this series: six for the Nintendo Entertainment System (re-releasing later on the first three as a 16-Bit compilation for the Sega Mega Drive/Genesis), two for the Super Nintendo, one for the Sega Saturn and Sony PlayStation, two as downloadable games for the Wii, PlayStation 3, Xbox 360 and one on Nintendo Switch, PlayStation 4, Xbox One, and PC. Capcom and Inti Creates designed 9 and 10 as throwbacks to the NES titles; their graphics and audio simulating the system's 8-bit hardware, while the gameplay emulated the gameplay of the original NES games. The company also published a series of Mega Man games for the Game Boy, based mainly on the NES games, and another two games for arcades; adding the various Gaiden Games elevates the "Classic" series into the largest continuity of the entire franchise.

Despite the sequels tending to feel similar to each other, the series as a whole remains enjoyable — and very hard — to this day.

The generally lighthearted, friendly atmosphere of the classic series tends to stick out like a sore thumb compared to its two Darker and Edgier Sequel Series, Mega Man X and Mega Man Zero. While in its seven-year dormancynote Mega Man 10 was released in 2010, while Mega Man 11 wasn't announced until 2017, the Classic series gained a Spiritual Successor in the form of Mighty No. 9, created by Keiji Inafune after leaving Capcom in 2010.

This series has a Best Episode crowner