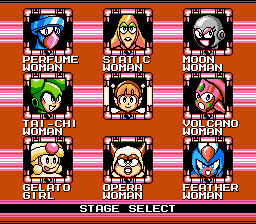 (aka Gatuca), begun in March 2009 and based on the Mega Man/Rockman series of games. The game stars Roll, and features a unique cast of Female Robot Masters, as well as Waltz and Toque.

This game is similar to Rockman R in premise, except it's fully done in 8-bit graphic style, with the limited color palette of the original Nintendo Entertainment System. Rockman Perfect Memories

has a forum dedicated to the game.

For any and all current developments, the source is here

On Jan 30, 2015, the developer has officially announced they've cancelled the project, due to a combination of losing interest in it, a hard time communicating with fellow devs, and due to the developer's personal life just becoming too hard at the moment to focus on such a project anymore.