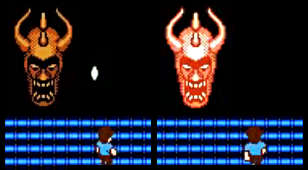 In many video games, enemies that don't die from one hit will blink a different colour when damaged. Most of the time, it tends to be white, although it may come in different variants, like red. This particular effect was chosen because it is achieved with a simple Palette Swap, a cheap operation for early video hardware.note Using palette swap means that there cannot be more than one such enemy on screen at a time (or they'll flicker, too) or the other ones must use other entires in the palette table (which is problematic due to its very limited size). That's why it's virtually always reserved for bosses and/or the player character.

The Flash of Pain will definitely be used on a boss that is Immune to Flinching because it conveys that the player's attacks are actually landing damage. Especially important if the boss has a weak point on its body that must be hit in order to cause any damage (in which case usually just the weak part of the enemy will flash). Absence of this feature is nowadays considered Fake Difficulty. Sometimes the player also flashes in a different color when hit, when the game doesn't feature Mercy Invincibility.

Prolonged flashing may also signify that an enemy has Mercy Invincibility after you have attacked it, in which case you must wait for it to stop flashing before you can damage it again.

A related analogue occurs in first-person videogames, where - because the player is unable to see their own character - if the player takes a hit, the entire screen will flash momentarily to indicate damage.

In some cases when a boss Turns Red, it will look the same as the Flash Of Pain, except it will flash repeatedly on its own.

This is also commonly used in fighting games when an attack has Super Armor on it to indicate that a hit landed without interrupting that attack.

This trope follows the Rule of Perception, of course, as the Video Game character presumably doesn't see his opponent flashing white for a split second.