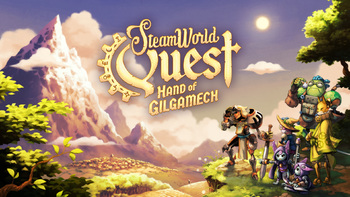 SteamWorld Quest: Hand of Gilgamech is a Turn-Based Combat RPG with card mechanics, released in April 2019 for Nintendo Switch and late May for Steam. Taking place in the Shared Universe of SteamWorld Dig and SteamWorld Heist, the game is set on a planet that is being invaded by an army known as the Void. Eager to stand against them and prove herself is Armilly, a Heroes Guild hopeful that's been waiting for her chance to truly prove herself despite repeatedly failing at tasks in the past.

Tropes found in SteamWorld Quest include: