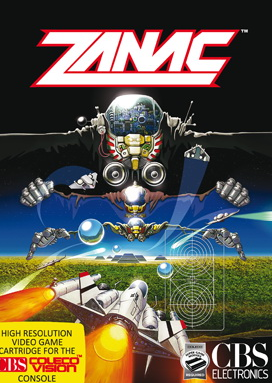 Zanac is a shoot'em up made by Compile. It has produced 3 main games:

Zanac is also one of the first shoot'em ups to feature dynamic AI. Zanac series gameplay focuses on defeating normal enemies rather than bosses.

The storyline, such as it is, involves the System, a construct left behind by long-dead precursors. The System was created to grant wisdom to those who opened its Icon properly, and destroy those who opened it improperly. Humanity's first attempt to open the Icon resulted in disaster, causing the System to assault human civilization. Facing extinction, humanity manages to open the Icon properly, but by this point, the System had grown beyond the Icon's control. However, the humans learned that the System was designed to fight massive enemy armadas, and may have difficulty coping with a lone attacker. With that, the AFX-6502-ZANAC fighter sets off on its desperate mission.

The Aleste series is related to these games; Compile were asked by Sega to produce games for the Sega Master System, but could not simply port Zanac due to Nintendo's anti-competitive regulations, so they made Aleste as a Spiritual Successor.