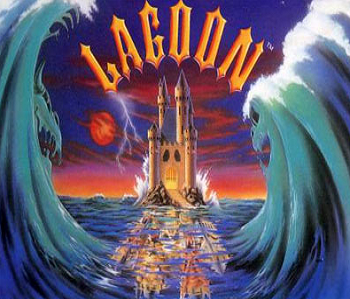 Lagoon is an Action RPG created by Zoom for the Sharp X68000 in 1990 and published for the SNES by KEMCO in 1991. The SNES version is the more widely known, due to the greater popularity of the system and the availability outside Japan. Most of the following pertains to the SNES release.

The game follows the journeys of Nasir, Champion of Light, as he fights to restore peace to Lakeland.

The prologue unfolds in a series of short animated scenes, followed by a briefing by Nasir's long-time mentor Mathias. It seems the water of Lakeland, which flows from Lagoon Castle, has been getting muddy recently. Mathias sends you to Atland, and the adventure begins. Nasir must fight his way through a series of areas defeating the forces of evil while meeting new friends and unlocking the mystery of his origins.

Lagoon plays like a hybrid between the Ys series and The Legend of Zelda series, using a similar leveling and control system to the former with the pseudo top-down perspective of the latter.

The original X68000 version of the game featured more side-quests than the SNES version, but the SNES version features a more flexible Magic system and additional supporting characters. The music in certain areas was changed between versions as well.