Tropes common to both Yume Kōjō: Doki Doki Panic and Super Mario Bros. 2 are found on the latter game's page. 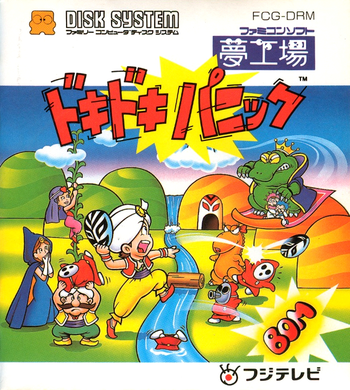 as a Mario-style tech demo by Miyamoto and company, and was dolled-up as Super Mario Bros. 2 after its initial release.

The story starts with twin children, Poki and Piki, reading a storybook when a hand suddenly grabs them and sucks them inside the book. The family of the twins and Imajin's girlfriend Lina discovered what happened thanks to their pet monkey Rūsa, and rush inside to save them. Sucked into the world of the storybook, the family has to fight off several monsters across seven chapters: Imajin, the balanced one; Lina, who can float for a few seconds; Mama, a very high jumper; and Papa, who has the strongest throw.

It was originally a Licensed Game starring the Mascots of Fuji Television's Yume Kōjō '87 (Dream Factory '87) event, which promoted several of Fuji Television's shows and other products. (The enemies were owned by Nintendo, which is why they could appear in other titles.)

Not to be confused with Doki Doki Literature Club! along with Doki, Doki Doki School Hours, DokiDoki! Pretty Cure, or Doki-Doki Universe.

Major differences between this game and Super Mario Bros. 2: