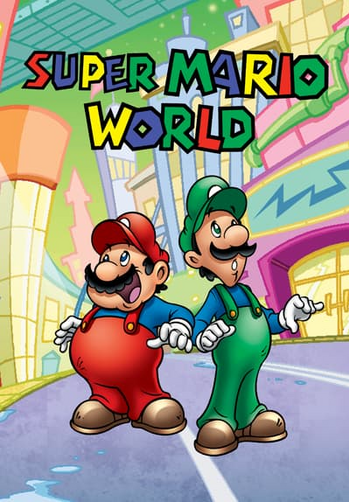 Mario: You didn't tell me you were bringing a secret weapon, Luigi!
Luigi: That's Mama Luigi to you, Mario!
— "Mama Luigi"
Advertisement:

Super Mario World (1991) was the third and final cartoon based on the Super Mario Bros. franchise, and the game Super Mario World in particular. It relocates the action to Dinosaur World, removed the Real World, dropped Toad (since he wasn't in the game), gave many characters different names, and expanded the cast to include Yoshi and various cave people, most prominently Oogtar.

The series was originally broadcast on NBC as a side series with Captain N: The Game Master, a treatment that its predecessor The Adventures of Super Mario Bros. 3 also received. It lasted thirteen episodes before it and Captain N were canned, with its time slot getting replaced by local news following the end of NBC's Saturday morning block.

This show has achieved high levels of Memetic Mutation from the final episode, "Mama Luigi", in which Luigi tells the story of how he found Yoshi.

This was the first instance of the somber tune that plays in the Super Mario World cartoon.

This was the first instance of the somber tune that plays in the Super Mario World cartoon.