Western Animation / Valley of the Dinosaurs 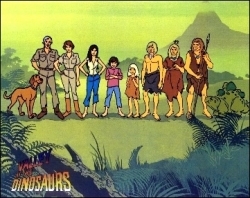 Not your modern Stone Age family note  From left to right: Digger, John, Kim, Katie, Greg, Tana, Lok, Gara, Gorok, Glump
In this short-lived Adventure series by Hanna-Barbera, the Butler family, composed of parents Kim and John, teenager Katie, preteen Greg, and Digger the family dog, are rafting down the Amazon River when suddenly they hit a rock, fall into a whirlpool, and are transported to a valley where cave people and dinosaurs live together.
Advertisement:

They're saved and taken in by one family, composed of Gara and Gorok, their teenage son Lok, their little girl Tana, and their baby pet Stegosaurus Glump. Together, the Butlers learn the ways of these people while constantly trying to leave the valley and return home. Each episode, the cave people face some problem that threatens the valley, be it dangerous animals, neighboring tribes, or natural disasters. The Butler family will often help solve these problems by using modern tools, such as a catapult, that the cave people haven't discovered yet. Sometimes though, the cave people's methods work just fine.