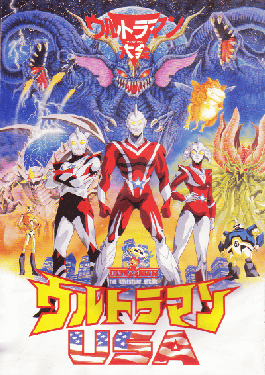 Ultraman: The Adventure Begins (aka Ultraman USA in Japan) is a four-part animated pilot that is an International Coproduction between Tsuburaya Productions (the owners of the Ultra Series that it is a part of) and Hanna-Barbera, with animation by Ashi Productions. It was released on October 12, 1987. It is the second animated series in the Ultra Series canon, after The☆Ultraman (aka Ultraman Joeneus).
Advertisement:

Scott Masterson, Chuck Gavin, and Beth O'Brien are the Flying Angels, a stunt pilot trio. One day, during one of their shows, they are consumed by a blinding light, only to return unharmed. The three are later informed that they have become hosts to three Ultra Warriors from the planet Altara (Ultra) in Nebula M78. Together, as the Ultra Force, they defend the Earth from extraterrestrial monsters called the Sorkin Monsters.