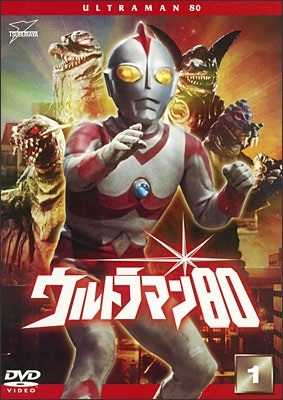 Ultraman 80 (or Ultraman Eighty) is a tokusatsu series, part of the Ultra Series that lasted from 1980-1981. It is the final official entry of the Showa Ultra Series, with the franchise going into partial hibernation for fifteen years afterwards.

The Japanese government discovers why giant monsters appear around the world — the monsters were created from the negative energies of hatred, racism, self-doubt, and anger. These negative energies manifested from the nightmares and selfish wishes of people and are "created" with malicious thoughts, giving credence to the monsters' "evil" natures.

An Ultraman named "80" (a translated sounding name of his real name — "Ehiti") comes from Nebula M78 and assumes the human guise of Yamato Takeshi, a schoolteacher who moonlights as a member of UGM, a government task force assigned to fight the monsters that appear.

80, as Takeshi, enacts a proactive plan to eliminate hatred and jealousy in humans by teaching young children to put aside their fears, their anger, and their pre-conceived notions of racism and close-mindedness. By teaching a new generation of children to be more open to new ideas and ways of thinking, 80 believes that this will lessen the monsters appearing over time as well as advancing the human race to be above all petty feelings.

Unfortunately, there are still too many factors in the world that contribute to negative energy, and 80 must answer the call to battle these creatures while still trying to maintain a human life in order to better understand where negative norms come from, as 80 is an alien that has transcended these negative issues coming from an advanced race.

Later in the series, 80 is helped by a mysterious woman named Hoshi Ryoko, who shares his goals of teaching humanity to overcome their problems. Ryoko is also an Ultra from Nebula M78, a princess named Yullian, who turns out to be 80's childhood friend. Together, the two Ultras fight the most powerful Minus-Energy Monsters yet.

With so many different ideologies and negative norms handed down from one generation of humans to another, 80 has his work cut out for him while staying on Earth.

Currently available for streaming on Crunchyroll