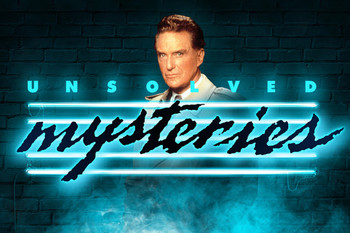 Join me. Perhaps you may be able to help solve a mystery.
— Robert Stack's intro for the first few seasons
Advertisement:

This article is about Unsolved Mysteries. Whenever possible, the actual family members and police officials have participated in recreating the events. What you are about to see is not a news broadcast.

This TV show ran from 1987-2002, with intermittent breaks in between, and was hosted for most of its run (which Channel Hopped from NBC to CBS and then Lifetime) by Robert Stack. It was revived from 2008-2010 on Spike TV, hosted by Dennis Farina, and again beginning in 2020 on Netflix with all-new mysteries. The original series run was seen in Canada in syndication.

As the show's name implies, this series delves into a variety of mysteries, showing dramatic re-enactments of each. They can range from typical missing persons cases and stories of lost loved ones to the paranormal: ghost stories, UFO's, the Loch Ness Monster, and all that good stuff.

Although it's presented like a piece of fiction, most every mystery is real. In fact, roughly 400 of this show's mysteries have been solved. It is believed to have originally directly competed with America's Most Wanted. All versions of the show have a telephone hotline set up that you can call if you have any information, while the current version only has a website

. Some of the mysteries presented back then have remained unsolved to this day, while others are still being solved. You may watch re-edited episodes of the original show with iconic host Robert Stack on Hulu and Amazon streaming services, with new updates from as late as 2017. Thanks to FilmRise, Unsolved Mysteries now has its own YouTube channel

These are true tropes, from the files of TV Tropes.org: