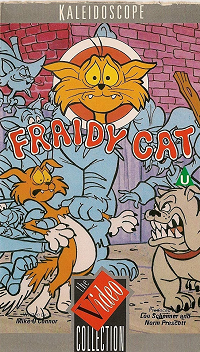 Fraidy Cat is a 1975 animated segment made for Uncle Croc's Block. The series was produced by Filmation and lasted for only 12 episodes. 6 other episodes were planned, but were scrapped due to the show getting cut from Uncle Croc when the latter was reduced to a half-hour. The series follows an anxiety-prone cat named Fraidy (voiced by Alan Oppenheimer) meeting up with his previous eight lives that are from different time periods (seven of which are voiced by Lennie Weinrib. Jasper Catdaver was voiced by Lou Scheimer), but they cause trouble for him rather than help him out of situations. The main joke of the series is that when Fraidy says a number one through eight, it summons one of his previous lives. Saying "nine" causes a storm cloud in the shape of a nine to chase Fraidy.

It almost caused Filmation to close down their studio and ABC ditched them in favor of Hanna-Barbera.