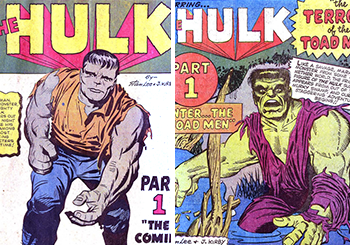 What a difference between issues #1 and #2.
All adown her back floated tresses of ruddy gold, with a slender jeweled circlet confining them at brow.
— Ozma as described in The Marvelous Land of Oz by L. Frank Baum
The diminutive brown-haired Princess was actually commanding him to give up his slaves.
— Ozma as described in Speedy in Oz by Ruth Plumly Thompson
Advertisement:

Sometimes, characters' colors aren't consistent from one moment to the next, whether it's a very notable miscoloration in one panel, or consistently recolored across an entire issue. It's typically small details, such as eye color, but more major details, like hair color or costume colors, can be changed too.

It may be due to various artists. Maybe publishing issues. Maybe they're retconning or deliberately redesigning an outfit from here on out. Maybe they didn't care.

If it's actually supposed to be changing In-Universe, it may also be due to things like dyes, different lighting in different environment, magic illusions, or shapeshifting, or some other explanation.

This is particularly prevalent in comics, including western comic books, newspaper comics, manga and Webcomics, but can happen with other media as well. Is frequently due to different artists but can also be due to retcons or just the artist being Off-Model.

Compare to Depending on the Artist, Adaptation Dye-Job, Early Installment Character-Design Difference, Hair Color Dissonance, Unreliable Illustrator. Supertrope to Sudden Eye Color. Not to be confused with Eye Colour Change, which is where a character's eyes legitimately change color as part of the story.