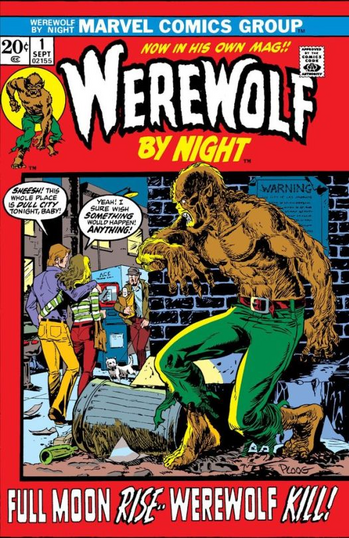 Werewolf by Night is a comic book series, created by writer Gerry Conway and artist Mike Ploog as a direct response to The Comics Code Authority's 1971 rule revision that allowed werewolves to be portrayed. The character debuted in Marvel Spotlight vol. 1 #2 in February of 1972 and was granted his own title which ran for 43 issues (September, 1972 - March, 1977). In 1998 Werewolf by Night was given a short-lived revival, which sadly was cancelled before it could reach a conclusion.
Advertisement:

Outside of his own titles, Jack has weaved his way through a number of other Marvel comic books over the years, such as Spider-Woman, Moon Knight, West Coast Avengers, X-Factor, Marvel Zombies and Doctor Strange: Sorcerer Supreme. In 2009 there was the the four-part Dead of Night Featuring Werewolf by Night as part of Marvel's MAX imprint, providing an alternate and mature take on the character.

On his eighteenth birthday Jack Russell finds he has inherited the curse of the werewolf, and has to battle an array of villains, ranging from vampires to gorgons to circus folk, most of which need him in some way or another for the execution of their Evil Plan. During The Dark Age of Comic Books, he turned into a bit of an anti-hero, Walking the Earth and fighting rogue supernatural creatures who give the rest of them a bad name. As of the 2010s Jack mainly serves as a member of the Legion of Monsters, protecting other monsters from being killed and providing a safe haven for them.

for a full list of Werewolf by Night's comic book appearances in chronological order, up to 2008.

The werewolf appears in the Super Hero Squad universe: in The Superhero Squad Show season 2 episode "This Man-Thing, This Monster", and as a playable character in Super Hero Squad Online. He is also seen in Jill Valentine's ending in Marvel vs. Capcom 3, and appears in the Ultimate Spider-Man (2012) TV-show as the leader of the Howling Commandos. A film adaptation was in the works in 2005

with cast and crew to be announced "shortly" and filming to start somewhere in 2006, but for reasons unknown nothing was heard from it again. Until 2022, when Marvel announced

a “Special Presentation” for October 7 exclusively on Disney+.

Werewolf by Night provides examples of: