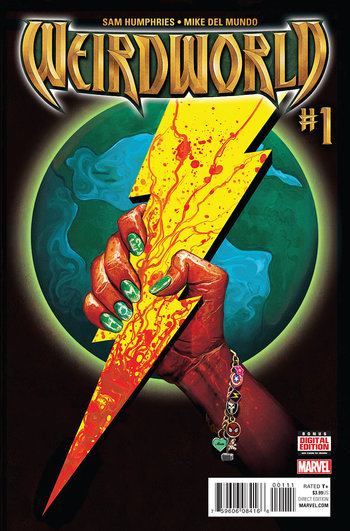 Weirdworld is both a setting and comic book set in the Marvel Universe. Weirdworld first appeared in the black and white magazine Marvel Super Heroes #1 (January 1976), with the story "An Ugly Mirror on Weirdworld," written by Doug Moench, with art by Mike Ploog, before the story moved to Marvel Premiere #38. Additional stories set in Weirdworld were published in Marvel Super Special and Epic Illustrated and Ploog returned to illustrated the first of a Weirdworld trilogy in Marvel Fanfare #24.

Weirdworld was a planet located in an unidentified dimension, where the gods of light and darkness were evenly matched and played an everlasting game in the Vault of the Stars. The main characters for the stories by Doug Moench and Mike Ploog were Tyndall of Klarn and Velanna, two elves that lived in a region of Weirdworld and the quests they undertook.

In 2015, Weirdworld was brought back for one of the tie-in mini-series to Secret Wars (2015). Weirdworld was a five-issue mini-series written by Jason Aaron, with art by Michael del Mundo. The main character was Arkon the Magnificent (who had been a warrior from a different fantasy land, Polemachus, during a previous run on Avengers), who found himself suddenly lost in Weirdworld and trying to find his way home. During this run, Weirdworld became more tied into the wider Marvel Universe, with the witch Morgan le Fay being the ruler of Weirdworld and a rebellion against her led by Jennifer Kale and her army of Man-Things. It was also revealed that Crystal Warriors (from The Saga of Crystar, Crystal Warrior) came from Weirdworld, too.

After Secret Wars ended, another Weirdworld series was published in 2016. Written by Sam Humphries, with art again by Michael del Mundo, the main character this time was Becca the Earthgirl, a teenage girl who had been in a plane that crashed into Weirdworld while carrying the ashes of her mother. Soon after arriving on Weirdworld, Becca teams up with Ogdeode the Catbeast and Goleta the Wizardslayer in order to find a way home.

Since then, Weirdworld has become a common alternate dimension for characters to find themselves in. The Black Knight found himself in Weirdworld for his own book, while the Champions also found themselves transported to Weirdworld (and under an enchantment that gave them fantasy identities, like Shadow Spider for Miles Morales and Mystic Marvel for Kamala Khan).