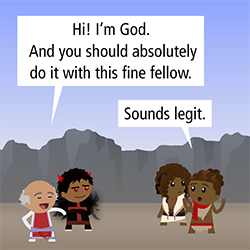 is a three-panel, daily parody of The Bible, hosted on ComicFury. While its main focus is humor and satire, its scope does extend beyond mere parody. It has an extensive cast of angels, many of whom play as "god types" (such as Lilith, the goddess of love, who can pose as Ishtar/Hathor/Aphrodite/etc.) At the heart of Bibble is an extensive backstory that binds all of the stories of the bible (as well as ancient mythology and historical events) together in order to try to understand them in a greater context.

There are essentially three overarching stories going on in Bibble.

Notable recurring characters include God, Satan, Lilith, and the archangels Michael and Gabriel.

The comic initially began in 2005, where it was more of a gag comic and followed the bible directly. As the comic neared the end of Genesis with the stories of Joseph, it began to update infrequently, and eventually shut down. In 2010 there was a brief reboot that attempted to include mythological stories (like the story of Amaterasu), but it only lasted for about a year. In 2014, a third reboot was started and continues to this day. The third version included more myths, including Inanna's Descent to the Netherworld and The Epic of Gilgamesh, as well as a backstory of the comic's version of the angels.

The comic's format is somewhere between a long-form story and gag comics. Each comic has three panels and includes a setup/punchline format. However, few of the comics can stand on their own, as they generally depend on knowledge of past comics to understand. Once in a great while, comics abandon the punchline altogether in favor of an action sequence or dramatic moment, though this is rare.