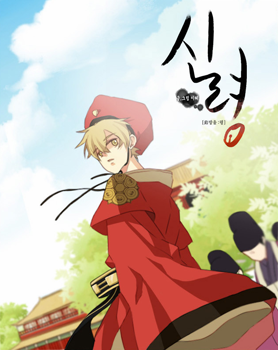 Do red camellias ring any bells?
"In a place of camellias drenched in red, I will be there...where it begins."
— Ga-Bi
Advertisement:

Divine Bells, also known as Godly Bells and Sinryeong (Korean 신령), is a Korean webcomic by Lee Hye. It is a Fantasy Drama with a major Quest set in a magical land divided into six countries. The titular bells choose their own masters and they determine the status, prestige, and influence of the countries their masters rule, however, the matter is rather more complicated. The presence or lack of these Bells also has great influence on the political status of each country. In particular, the political future of Myung-Joo's King, Hong-Ryung seems to be doomed without a Bell, but at equally great peril should he obtain one.

When the owner of three of the eight existing Divine Bells dies, leaving them to choose new owners, the present monarchs of the six countries gather for the bells to determine their new masters. However, these particular bells always pick the same country, except this time, and the resulting turmoil leads to a race to find the original creator of the Bells, a mysterious priestess named Ga-Bi.

Has a Character Page in development.