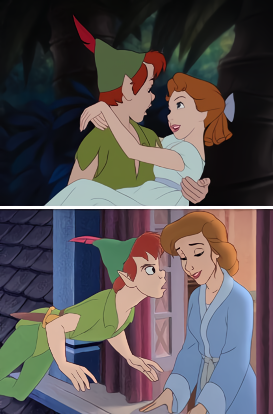 Yes, Peter, people grow up outside of Neverland.* Top: Peter Pan, Bottom: Return to Never Land
"But now I am Six, I'm as clever as clever,
So I think I'll be six for ever and ever."
— A. A. Milne, Now We Are Six
Advertisement:

As you know, Growing Up Sucks. Some children, however, have found a way to halt their aging at childhood via Applied Phlebotinum or some supernatural means. Most of the time they'll have the mind, emotional maturity, and/or sensibilities of a child as well as a prepubescent body; adults in children's bodies are more likely to find it inconvenient or downright sucky, which is the Sub-Trope, Not Growing Up Sucks.

Note that this must happen in-universe. If characters in a long runner series stay forever in a given age simply to keep the setting the way it is (like The Simpsons all being the same age for over 30 years), that's Comic-Book Time.

Older Than They Look is the Super-Trope of this.

Compare Not Allowed to Grow Up, and Really 700 Years Old. Compare also with Immortality Inducer, which tends to include "anti-aging" as part of the package. Contrast Rapid Aging.

Not to Be Confused with One of the Kids.