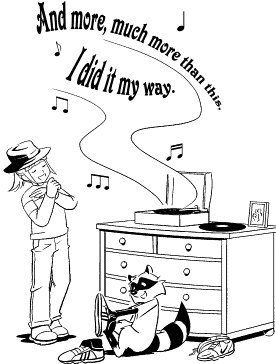 Simon Squirrel: We don't like children's music.
Simon, Chloe Pig, and Belinda Bear: No, no, no!
— Peppa Pig
Advertisement:

Music/Age Dissonance occurs when characters sing, dance, or listen to songs that are clearly outside their demographic group. It can be played straight or Played for Laughs — such as when the characters are ignorant about a song's meaning because they're either too young and innocent or old and culturally out-of-touch to notice the profanity and/or sexual/violent themes (especially if the song is also in a different language).

In the case of children, this trope can be the sign of an Adorably Precocious Child, a young person who is Wise Beyond Their Years, a Dirty Kid trying to get a rise out of their elders, or, in darker cases, a child exhibiting Troubling Unchildlike Behavior. In the case of older adults, it can indicate someone who's desperately trying to be up to date by dropping the latest slang terms and rashly diving into whatever the hottest new musical genre is at the time or that a seemingly morally upright senior citizen is really a Dirty Old Man or Dirty Old Woman. Still, it is possible for an older adult who falls into the category of Cool Old Guy or Cool Old Lady to successfully carry it off.

When used to characterize someone, this overlaps with AM/FM Characterization. Compare with Isn't It Ironic?, Age-Inappropriate Dress, and Ironic Nursery Tune.

This trope is limited to In-Universe examples. The appropriateness of someone in Real Life unironically listening to or performing music clearly not aimed at their age group is subjective and, in the case of older singers, can only lead to Complaining About Music You Don't Like. Real Life examples involving children and "adult" songs are extensively covered by Age-Inappropriate Art. Sub-trope of Entertainment Above Their Age.

The elderly Miss Crawly drives while singing along to a metal song ("Chop Suey!").

The elderly Miss Crawly drives while singing along to a metal song ("Chop Suey!").