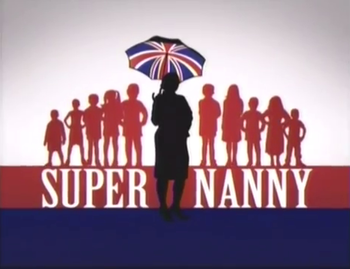 A Reality TV show produced by Ricochet which originated in the United Kingdom. It's about Jo Frost helping parents who are struggling with their children's behavior. The UK version aired on Channel 4 from 2004-2012, and the US version on ABC from 2005-2011.

Professional nanny Jo Frost devotes each episode to helping a family where the parents are struggling with their child rearing. Through instruction and observation, she shows the parents alternative ways to discipline their children and regain order in their households. Frost is a proponent of the "naughty chair" theory of discipline, and is strictly opposed to spanking.

In May of 2019, eight years after the U.S. version ended its run, it was announced

that the show would be seeing a U.S.-based revival, set to air on Lifetime rather than ABC, which debuted on New Year's Eve of 2019. Watch the launch trailer here

See also It's Me or the Dog for the canine version (which is also produced by Ricochet), and My Cat from Hell for the feline equivalent.

Tyler pushes his little sister right off the scooter.

Tyler pushes his little sister right off the scooter.