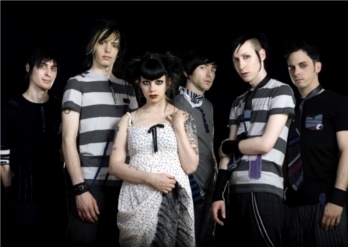 According to their vocalist Chibi: "It kind of works well for the music that we're making. Sort of contrasty, you know? Birthday, and massacre. Light, and dark. Cute, and evil."

The Birthday Massacre is an audio/visual project that has been in development since 1999. The sights and sounds of the Birthday Massacre branch into the wide range of creative themes and blend together a colorful palette of music genres and contrasting imagery. By combining imagery, sound, fashion, and performance, we aspire to create an experience for our audience that is both unique and multifaceted. Through the use of creative media, we have developed a world inspired by emotion, memories, satire, horror, romance, fantasy, nostalgia, and tragedy; a world we hope to evolve and explore for a long time to come.
Advertisement:

And they are awesome.

And their DVDs are: