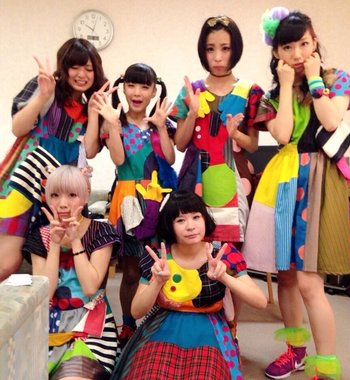 Brand-New Idol Society (Better known as BiS for short) is a Japanese Idol Group that was founded in 2010 and disbanded in 2014. Originally consisting of four members, the group experienced several lineup changes to the point where by the time of their disbandment, there had been a total of 12 girls who had been in the group, with only founder Pour Lui and Nozomi Hirano being the only original members remaining.

Their overall gimmick was one big Take That! towards the idol industry, often using motifs and imagery of either Nightmare Fuel, Fan Disservice, and even borderline pornography at times, in their attempt to "uglify idol events". This in turn caused a few members to resign from the group, due to disagreements to the "un-idol like" image they were being made to enforce.

They have a sequel group called BiSH.

Two years after their disbandment on July 8, 2016, it was announced by Pour Lui, Kenta Matsukuma and Junnosuke Watanabe that BiS would reform under a new lineup including Pour Lui, and that auditions were going to be held.

The final lineup consisted of:

The former members were:

Fashion designer Junko Koshino was also added as an honorary life member, however, she did not record any singles with BiS.

who performed the ending theme to The Powerpuff Girls.