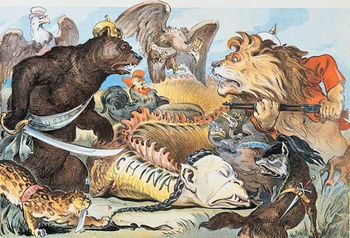 Spot all the national animals!note Clockwise from the top-left corner: American bald eagle, Russian bear, French rooster, German black eagle, British lion, Italian wolf, Austro-Hungarian two-headed eagle, Chinese dragon, and Japanese leopard.
Now the Peke, although people may say what they please,
Is no British Dog, but a Heathen Chinese.
—T. S. Eliot, "Of The Awefull Battle Of The Pekes And The Pollicles" (later put to music in Cats)
Advertisement:

In media, especially those with talking animals of any kind, certain animal species are often associated with a real-life human national/ethnic/racial group, and will be portrayed as National Stereotypes. Sometimes they will just have the accent, sometimes they will play up the positive and/or negative stereotypes associated with that nation (the latter often overlapping with Space Jews, and occasionally leading to Unfortunate Implications).

Occasionally, the animal is portrayed as the pet of a human being, who is a walking National Stereotype themselves (in this case, the animal doesn't need to be anthropomorphized). The animals could be wild animals actually native to the country, or domestic animals that are primarily bred there, or chosen by the government to be an official mascot (thus appearing on the national flag and/or coat-of-arms). Cat and Dog Stereotypes can come into play, if particular breeds of various national origins are depicted.

Alternatively, the same Animal Stereotypes associated with a particular species may simply be similar to the National Stereotypes associated with a particular country. Two warring nations can be portrayed as two animal species, whose Animal Jingoism reflects the real-life jingoism between the countries. Political Cartoons and Propaganda Pieces (like the one pictured above, which references the Boxer Rebellion

A number of these stereotypes are particularly widespread and well-recognized, enough so as to merit their own tropes:

Obviously, this is a sub-trope of both National Stereotypes and Animal Stereotypes. Closely related to Anthropomorphic Personifications; compare and contrast this trope with Nations as People, when humans are used to symbolize an entire country. And also see Wikipedia's list of national animals

See Analysis.National Animal Stereotypes for a detailed list of cultural and regional animal stereotypes around the world.