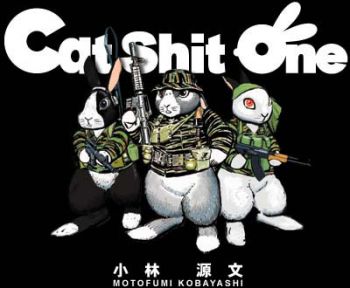 Cat Shit One is a three volume manga series written and illustrated by Motofumi Kobayashi. Published in Japan in 1998 by Softbank Publishing, when the manga was brought to the U.S., it was renamed Apocalypse Meow to parody the title of the film Apocalypse Now, which also took place during The Vietnam War.

The original manga follows three American soldiers in the Vietnam War named Bota, Perky and Rats. All three are in the recon team called Cat Shit One. Each mission (or chapter) shows the daily activities of the reconnaissance group in Vietnam. There are sections of the manga which give brief history and truths behind the war, such as the types of weapons used by different countries and the activities of forces in the war.

In Cat Shit One '80, the story continues to follow the three protagonists as they became involved in various low intensity conflicts in the 1980s. Perky, now a member of Delta Force, is attached to the Special Air Service and is involved in various SAS operations while Rats and Bota are now involved with the U.S. operation in Afghanistan against the Soviets.

The Animated version seems to take in an Alternate Timeline, with the events occurring shortly after the 1991 Gulf War, and taking place in the Middle East.

And in case you haven't noticed by now, they're rabbits.