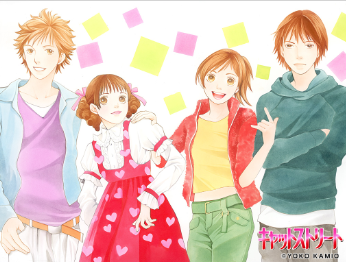 There's a school called El Liston. It's different than other institutions, since it's a free school: where students in special circumstances (due to their characteristics or their family circumstances) make friends and follow their dreams. Students are free to come and go, just like stray cats.

Keito Aoyama, a former child actress who's lived as a recluse since she blacked out during the performance of a musical, is offered by a mysterious man to attend this school. Although reluctant at first, she joins El Liston and starts making friends, knowing love and progressing in her path towards discovering her purpose in life.

Cat Street is a shoujo manga by Yoko Kamio (of Boys over Flowers fame), serialized in Betsuma Margaret from 2004 to 2007 and compiled in eight volumes. It sets apart from other works in the genre by following Keito and her friends' personal growth rather than romance (although love is present in their lives as well).

It was adapted into a 6 episode drama by NHK in 2008, and licensed in several countries like France and Spain.